“Russia now has a global poker boom. The results of Partypoker Millions Sochi astonished us. We were expecting such a hype but still were impressed to see that in reality,” – these are the words of Artur Voskanian, the head of Poker Club Management. And he is absolutely right. It’s time to raise the bar. The next Partypoker Millions champion will receive at least a million dollars!

We expected PokerStars Championship Sochi with guaranteed prize fund of $2.5 million in Main Event will become the most spectacular event of this and following years. We were wrong. We are expecting even bigger series with ambitious prize structure this September: Main Event guaranteed money is $5,000,000, and the winner will take home at least $1,000,000…

To be honest, we can hardly believe this huge guaranteed money will be covered. Yes, the people are hungry for poker. Bug time. The demand is incredibly high now. The buy-in is equal the one on upcoming PokerStars Championship – $5,300, and the guaranteed money is twice bigger.

Dmitriy Chop won PartyPoker Millions in Sochi in March and earned $225,000, with more than 1,000 people participating in the tournament. The buy-in was about $1100 (five times less). Million of guaranteed was barely covered.

September is long time ahead. PartyPoker has one card up their sleeve – Faze 1 and satellites (which already started)!

The schedule and faze 1

The series is scheduled on September, 1-11 that year. The place is the same. There is no official scheduled released yet. There is no other info. Only the date and screaming guaranteed money – nothing else.

From the other side, side events are far more interesting to the most of the players in comparison with the Maine Event.

The most important fact: on April, 23 online satellites to the Faze 1 of PartyPoker MILLIONS Sochi started. Faze 1 is live and online satellites with buy-ins of $550, which allow to get to Day 1 of Main Event (to participate in the Day 1 directly you have to pay the full price of $5,300). 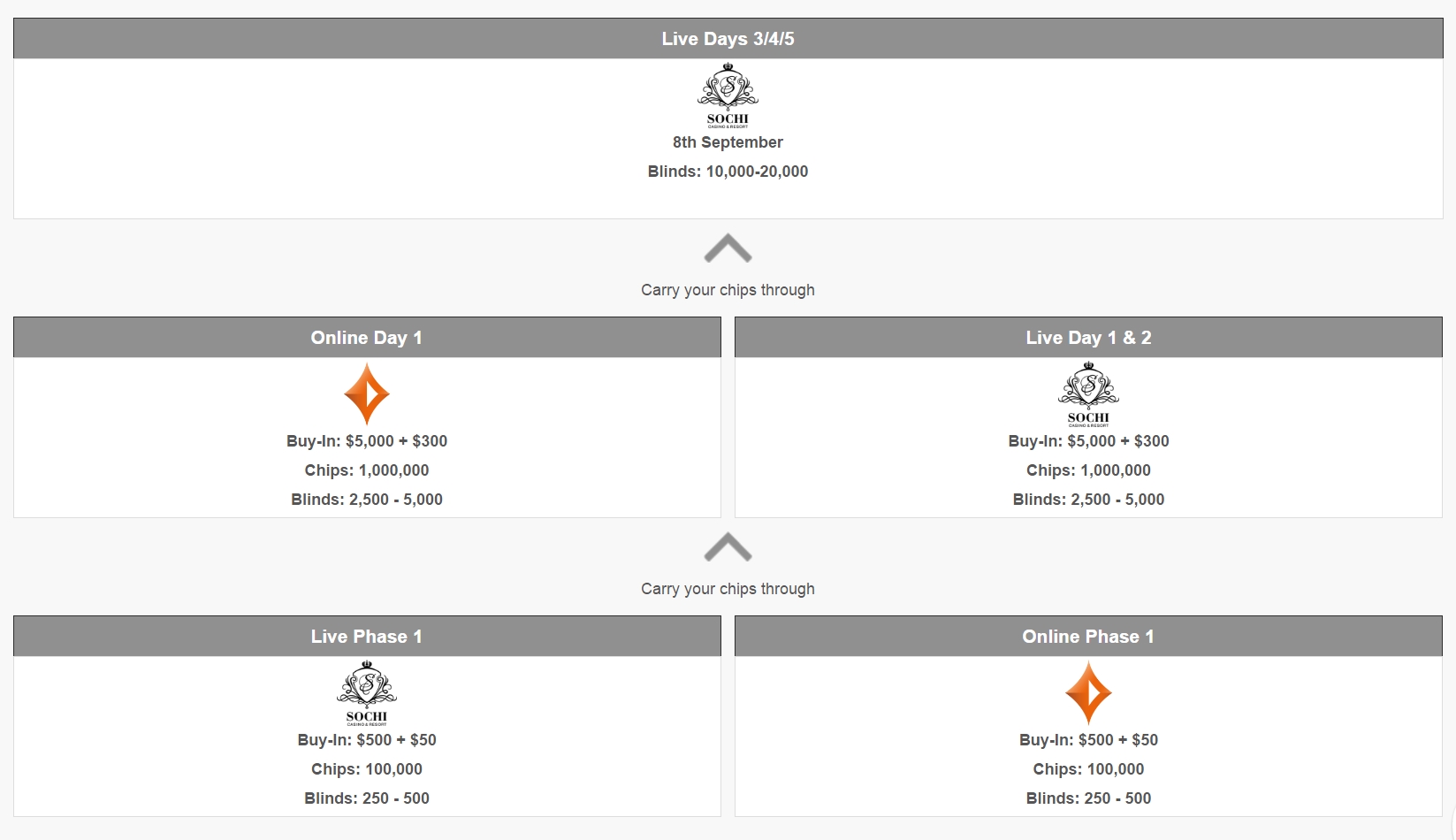 Turns out, the stack of some players could be several times more (or less) in Day 1, including those who entered the tournament directly? It’s uncertain who will enter Day 1 from the Faze 1. The info will be released in the nearest future.

This might be weird, but organizers claimed that standard satellites in the room should have started on April, 2nd and it turned out they started just on April, 23rd. Buy-ins start at $0.01 и and reach $109. They allow getting to Faze 1.

They are easy to find, search for the phrase Millions Russia or place - Sochi. There is the following info on the official web site:

“All the Russian players will get random tickets to play in the satellite free each weekend”. There is no official confirmation yet.

In general, the conception of satellites for Russian region is not clear yet, but it looks promising, considering the event is four months ahead…

We will update the article, as new info would emerge.

All the poker clubs in Russia